Craig Cahn is one of seven dateable dads in Dream Daddy. He loves to exercise and play sports, as well as cook and coach softball. He's the father of three daughters: identical twins named Briar and Hazel and a baby named River.

Craig was once college roommates with Avatar, and has a lot of memories of crazy things the two had done back then. Craig's former out-of-control college lifestyle earned him the name "Keg-Stand Craig" and Dadsona would reference a few of what the two had done together through dates. Dadsona and Craig eventually stopped communicating with one another, most likely when Amanda was a baby. Despite his indecisiveness and reputation for being irresponsible in the past, Craig became a fitness enthusiast and dedicates his life to working out, his children, and running a business dedicated to selling fitness gear. Dadsona will eventually learn that Craig's a workaholic and barely has time to relax due to his dedication to his children and his business.

Craig eventually got married to Ashley (nicknamed "Smashley"), another old friend of Avatar when he and Craig were in college, and they ended up having their daughters. However, Craig and Ashley eventually got divorced, but were able to part on well-enough to be able to have joint custody of their daughters. Craig also began to coach his twins' softball team after seeing how energetic they are. While he isn't opposed to the idea of being in a relationship, Craig isn't really looking for one, mostly because of his strong focus on his daughters and his busy work schedule. Despite this, many women, especially the mothers of his softball team girls try to flirt with him. His business was initially in California before he relocated to Maple Bay and moved into the cul-de-sac before Dadsona.

The Craig's route starts when you find him on the street. 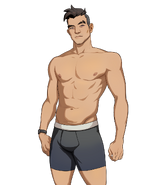 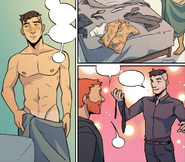 Dad helping Craig with his Outfit

Craig nervous about the Reunion 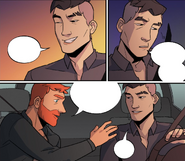 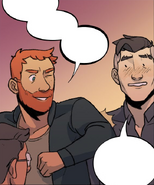 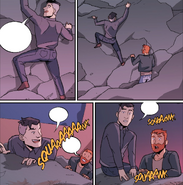 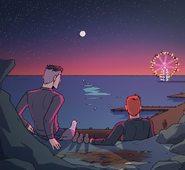 Two Bro's Chilling in the Moonlight

Going back to Craig's house

After putting the kids to sleep, Craig thanks Dad for the day and asks him out

Retrieved from "https://dreamdaddy.fandom.com/wiki/Craig_Cahn?oldid=1108"
Community content is available under CC-BY-SA unless otherwise noted.